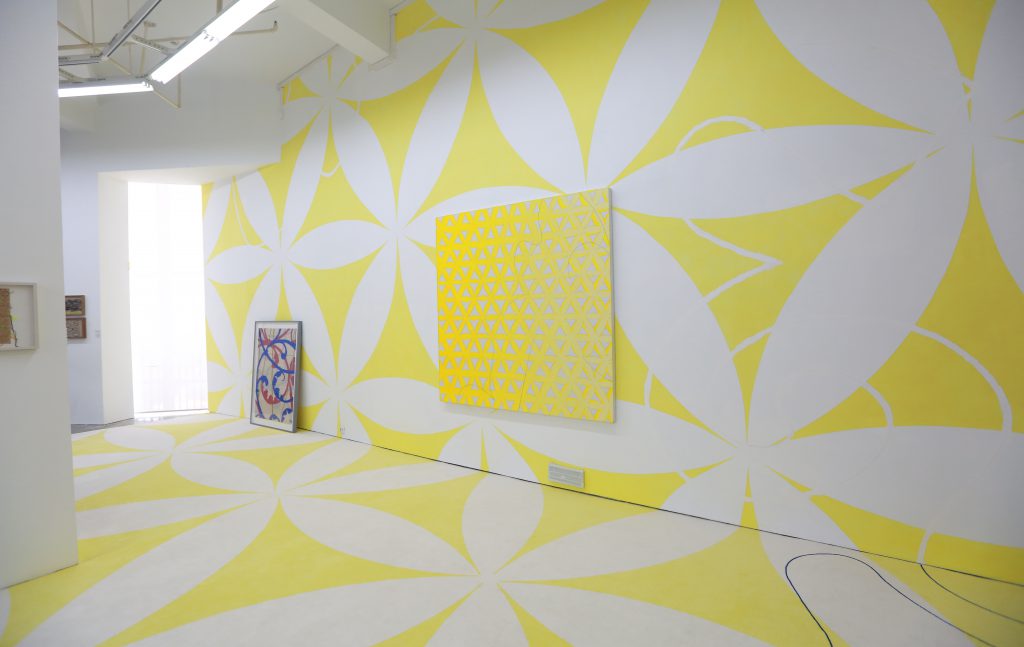 where to buy neurontin Sacred Geometry and Infinite Code

Being the basic element of visual art, pattern also goes beyond the scope of visual arts. Many famous experiments such as how sound waves of different frequencies alter the vibration patterns of sand or water endeavor to reveal the essential function of pattern – a visual record of the occurrence and development of life energy. Bi Rongrong’s most recent solo exhibition at the A Thousand Plateaus Art Space was entitled Pattern XI-∞. The symbol “∞”, in a sense, indicates both evolution and going back to the origin; or in other words, the stream, intersection and integration of consciousness. If you manage to look at the exhibition from the perspective that goes beyond arts, probably you will be able to see it as a journey that would lead you to trace back to and decode source consciousness. And to some extent, Pattern XVII – A Piece of Stone Wall – Painting 2 could be seen as both the prelude and the center of the story.

On the square-shaped canvas, several identical yellow flowers with six petals burst into bloom in an organically interconnected manner. Moreover, they are not willing to stay quietly inside the canvas. Instead, they want to grow wild as if they were genuine plants. And, with the consent of the artist, they manage to expand their presence by crawling their way onto the surrounding walls and floor. The flower-shaped yellow-and-white graffiti on the walls as well as the carpet with same patterns on the floor, despite their different texture, collectively create a half-close and half-open visual space. Some obscure sewing threads are looming within the “space”, wandering through the hallucinatingly bright-colored field. Why does the story start from the flowers? It’s because the artist possesses no pre-set assumptions about their origin. She bumped into these “very oriental” ornamental patterns on various architectures when she travelled in Europe and the Middle East and was deeply touched. Afterwards, she integrated them into her practice in a highly intuitive manner. To her, the pattern was far more than just being “ornamental”. It derived from the “orient” that was at the very depth of European cultural and geographical perspective. It had a long history, so long that it almost symbolized the sacred geometry of Eurasian civilization – “Flower of Life”. “Flower of Life” was firstly found in the Temple of Osiris in Abydos, one of the most important archaeological sites of ancient Egypt, which dated its history back to six-thousand years ago. And according to some other historical recordings, the emergence of the pattern could be further dated back to over ten-thousand years ago. Constituted of several evenly-distributed and overlapping circles, the crossed edges formed shapes of petals. The six petals were symmetrical, with their tips forming a hexagon. Throughout the history, mathematicians, philosophers, architects and artists became aware of the perfect proportion represented in the pattern.  The “Flower of Life” was deemed as the eyes of Ra, the ancient Egyptian deity of the sun; and apart from ancient Egypt, its appearance was also found in architectures in Phoenicia, Assyria, ancient India, the Middle East and medieval Europe. It’s worth mentioning that Bi Rongrong chooses to cover a large area of this work with the dazzling golden yellow. In ancient Egypt, the role of Ra was quite similar to the Solar Plexus Chakra in Hinduism. They were both represented in golden yellow, and were believed to be in charge of power, form, vision, fire and the core area of life. The synchronicity in terms of time and space was accented thanks to the appearance of “Flower of Life”. Bi Rongrong once took a picture of a label she saw at a museum in Berlin since it featured a restored map with the pattern of “Flower of Life”. But as the texts were in German, the artist failed to get any information about the site shown in the restored map. Later we translated the texts on the label: German archaeologist Walter Andrae and his team directed the excavation of the ancient Assyrian capital of Assur in early 20th century. During the process, a palace built during the Parthian period with numerous patterns of “Flower of Life” was found. Coincidently, at the day I translated the texts, I also looked into information about a piece of antique carpet. And in a picture from the British Museum, I noticed a piece of construction debris of BC 700 found in ancient Assyrian city of Nineveh. It was covered with patterns of the “Flower of Life” and in the caption it was called “stone carpet”. It’s clear that during the period of ancient Mesopotamia, people saw ornamental patterns on the surface of architecture as a kind of fabric carpet. “Sacred geometry” was needed to be imprinted on virtually all dimensions of our dwellings. In other words, it became a kind of spatial weaving of the energy field. Similarly, Bi Rongrong’s work integrates painting, fabric, carpet, architectural space (i.e. the façade, floor tiles, doors and windows) and even digital screens together, endeavoring to re-create the source space and time embedded in her mind where sacred geometry has left a strong imprint.

The “Flower of Life” bloomed in ancient Egypt and ancient Mesopotamia, and made its way further to other regions and religious around the world, including Turkey’s Ephesus, Israel’s Galilee and Masada, medieval Italy, the Grand Mosque of Córdoba in Spain, the Golden Temple in the city of Amritsar and the Ajanta Caves in Aurangabad district of India, and even the Forbidden City in China. Leonardo Da Vinci also looked into the mathematical structure of the “Flower of Life”. He made many drawings and eventually discovered the form of Fibonacci Sequence and isomorphic proportion of Vitruvian Man. Moreover, Da Vinci also drew some geometric images deriving from the “Flower of Life”, including the “seed of life” (which consisted of seven identical and overlapping circles and the arcs of the seven circles constituted a “Flower of Life” in the middle of the pattern), “egg of life”, “tree of life”, “fruit of life” and the Metatron’s Cube.  The Metatron’s Cube, in particular, could be represented in the form of stellate tetrahedron, hexahedron, octahedron, dodecahedron or icosahedron. These five geometric shapes, collectively, were also known as “Plato’s Polyhedra”. In ancient Egyptian mythology, the shape of Merkaba, an alternative form of the “Flower of Life”, was exactly the Metatron’s Cube. The extremely rich and profound information and implications contained within it have been re-discovered and re-valued by contemporary western new-century theories and combined with modern knowledge within the fields of cell, gene and interstellar study. Furthermore, new interpretation has been imbued, which has greatly extended its original implication. The newly-emerging meaning produced by the newly-combined language and new technologies, like the cyberspace created during the computerized process of weaving carpet as shown in the two-channel video Patter XI – Brickbat of Laforet – Video 1, represents a brand new coding language of classic weaving methods. After all, human civilization is, in nature, a kind of coding system. Art and mathematical algorithm, in this regard, accomplish the same task within the system. In the above-mentioned video, each stich technique of weaving is visually re-processed into some mysterious visual signs and color blocks. In this way, the weaving process behind the patterns is graphicalized  again in the form of an alternative kind of pattern. As written earlier, the core of pattern is in fact a visual record of the occurence and development of the form of life energy. Likewise, in Pattern XV – Carpet with Floral Lattice – Painting 2, the artist pixelates the botanic patterns on Persian rugs. For instance, she manages to abstract  some typical patterns found on carpets from central Asia, such as the image of pomegranate, enabling viewers to access the halo of energy emitted from traditional oriental patterns from a more geometric and cyber perspective. And in Pattern XXI – Untitled – Collage 1, linens and blended fabrics decorated with ancient floral and geometric patterns are rolled and collaged together, with fluorescent green stitching lines along the rim. The fluorescent green lines here embody the coordinate lines of the artist’s individualized spiritual language. This green color and the computer-processed colors shown in the two-channel video share something in common: they both give out a kind of “brightly fluorescent” texture and the fluorescent luster is then applied onto the hanging carpets and fabrics collaged by those ancient oriental patterns. The artist attempts to use the fine and fluorescent modern “suture” to explore, discover, stitch, collage and build a meta-space that transcends time and space within this exhibition. The meta-space is neither mythological, archaeological, nor contemporary.  It features crystal structure that will perpetually grow internally. Like a spore or the fractal element of plant, the meta-space is the most fundamental model that can accommodate the potential of infinite growth.

Compared with her previous works, a great number of plant patterns are featured in this exhibition. Apart from the “Flower of Life”, there are also the floral scrolls in the Window series and the honeysuckles in the Laforet’s Bricks series. From 7000 BC to 1000 BC, in areas such as the ancient Egypt, the Mesopotamia, Asia Minor and east Mediterranean, migration and cultural sharing of different tribes led to close connections in the art forms created in these areas. In the meantime, mythology, art history and geography, collectively, made contributions to further enrich the migration history of the “family”. Take the patterns of floral scrolls and honeysuckles in the exhibition for instance. They share something in common with the patterns of palm (which features the shape of petals of honeysuckles and the structure of date palm), date palm and grape. According to some researchers of patterns, date palm patterns in particular, share the same origin with the “Flower of Life” in terms of geometric composition. Geographically speaking, “Flower of Life” is the geometric abstraction of the vibration of source consciousness; however, it also vividly and intuitively corresponds to real plants such as lilies, chrysanthemums and Egyptian water lilies. The life of plants, in nature, includes repetition, fractal, mathematical structure, abstraction and sacredness; but in the meantime, it is also fleshly, tactile, distinctive, vividly alive and has an ultimate end to reach. For instance, the stop motion animation Pattern XII – Window – Video 1features the process of a lump of fabric with patterns of floral scrolls managing to liberate itself from the state of entanglement. Here comes the part that we will end the story with things that go beyond all the external criteria and references. Patterns are liberated from the previous definition of merely being two-dimensional ornamental elements. Moreover, they even manage to get back to history and then escape from it again. They manage to break through the state of disarray and unrecognition and to make their way into our eyes and the overlapping area between our perception and the source in an ideally free manner. Like the adventures and encounters that have inspired the artist to start this journey of art, sacred geometry not only contains source code in its image, but when and where we see it and how to weave it into its inner integrity is also a part of the infinite code. And what the artist does is to represent the process of coding in the most intuitive way.